A film by Louis Campana

This movie proves the existence of a tacit coalition between the politicians of rich countries and their allied in the developing countries with the multinational companies and the bank system in order to build a world according to their views.
Two third of mankind are excluded from this world, almost 4 billion men an women, 1 billion of whom are not properly fed everyday.
The way we have to follow is to switch from voluntary servitude to the denunciation of injustice, from denunciation to resistance and from resistance to new alternatives.
This approach is inevitable for al human beings who wish to be the actor of their own live, in balance with others and with nature, in harmony with their own source, on the way of their accomplished humanity.
Louis Campana 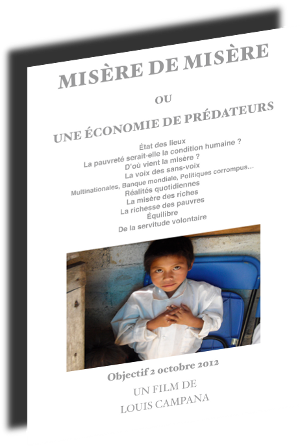